An innovative genetic study of blood protein levels, led by researchers in the MRC Integrative Epidemiology Unit (MRC-IEU) at the University of Bristol, has demonstrated how genetic data can be used to support drug target prioritization by identifying the causal effects of proteins on diseases. 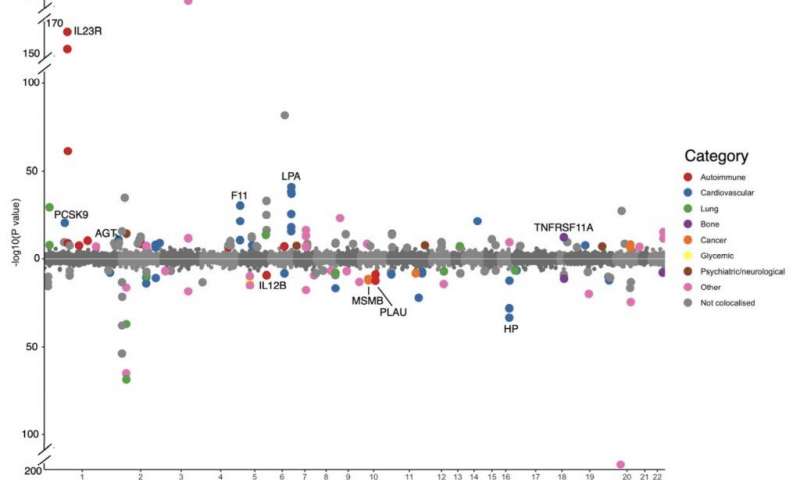 Comparing the genetic inferred causal relationships of proteins on human diseases with historic drug deveComparing the genetic inferred causal relationships of proteins on human diseases with historic drug development programs, this study, for the first time, showed that protein-disease pairs with genetic predicted causal evidence is more likely to be approved drugs for the same indications.
Working in collaboration with pharmaceutical companies, Bristol researchers have developed a comprehensive analysis pipeline using genetic prediction of protein levels to prioritize drug targets, and have quantified the potential of this approach for reducing the failure rate of drug development.
Genetic studies of proteins are in their infancy. The aim of this research, published in Nature Genetics, was to establish if genetic prediction of protein target effects could predict drug trial success. Dr. Jie Zheng, Professor Tom Gaunt and colleagues from the University of Bristol, worked with pharmaceutical companies to set up a multi-disciplinary collaboration to address this scientific question.
Using a set of genetic epidemiology approaches, including Mendelian randomization and genetic colocalization, the researchers built a causal network of 1002 plasma proteins on 225 human diseases. In doing so, they identified 111 putatively causal effects of 65 proteins on 52 diseases, covering a wide range of disease areas. The results of this study are accessible via EpiGraphDB: http://www.epigraphdb.org/pqtl/
Lead author, Dr. Zheng, said their estimated effects of proteins on human diseases could be used to predict the effects of drugs targeting these proteins.
"This analysis pipeline could be used to validate both efficacy and potential adverse effects of novel drug targets, as well as provide evidence to repurpose existing drugs to other indications.
"This study lays a solid methodological foundation for future genetic studies of omics. The next step is for the analytical protocol to be used in early drug target validation pipeline by the study's pharmaceutical collaborators. We hope that these findings will support further drug development?to increase the success rate of drug trials, reduce drug cost and benefit patients," said Dr. Zheng.
Tom Gaunt, Professor of Health and Biomedical Informatics, University of Bristol, and a member of the NIHR Bristol Biomedical Research Centre, added: "Our study used publicly available data published by many researchers around the world (collated by the MRC-IEU OpenGWAS database), and really demonstrates the potential of open data sharing in enabling novel discoveries in health research. We have demonstrated that this re-use of existing data offers an efficient approach to reducing drug development costs with anticipated benefits for health and society."
By Phys.org